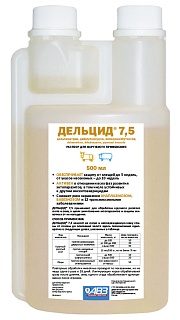 The mechanism of action of deltamethrin is based on blocking the neuromuscular transmission of nerve impulses at the level of peripheral nerve nodes, which leads to uncontrolled activity of the central nervous system and the death of ectoparasites.

Diflubenzuron (3-(2,6-difluorobenzoyl) - 1-(4-chlorophenyl)- urea) - a compound of a group of chitin inhibitors disrupts the hormonal processes that ensure the synthesis of chitin in the body of arthropod larvae, which disrupts the molting process, causing the formation of ugly non-viable forms, the termination of egg laying, the hatchability of larvae from eggs and the replenishment of the population.

Piperonyl butoxide (5 - [2 - (2-butoxyethoxy)ethoxymethyl] - 6-propyl-1,3-benzodioxol) is a synergist of pyrethroids, blocks the activity of the enzymes monooxygenases and carboxyesterases of ectoparasites involved in the detoxification of insecticides, improving the penetration of pyrethroid through the cuticle, enhances its effect on the insect nervous system, accelerates the onset of paralysis.

After the skin application of the drug, the active substances included in its composition are evenly distributed over the surface, practically not absorbed into the systemic bloodstream, accumulate in the epidermis, hair follicles and sebaceous glands of the animal, have a long-term contact insecticidal and repellent effect.

DELCID ® 7.5 is active against larval and imaginal phases of ectoparasite development, including those resistant to other insecticides, causes the termination of egg laying and/or violation of larval hatchability, the formation of ugly non-viable individuals and replenishment of the ectoparasite population.

The use of the drug DELCID ® 7.5 reduces the risk of infection of animals with vector-borne diseases carried by ticks and insects, including babesiosis, anaplasmosis, teileriosis, anthrax, tularimia, foot-and-mouth disease, tuberculosis, brucellosis, setariosis, moraxellosis, bluetongue, infectious nodular dermatitis of cattle, wolfarthiosis and onchocerciasis. DELCID ® 7.5 after skin application causes the death of ectoparasites before the transmission of the pathogen to the animal.

According to the degree of exposure to the body with oral and cutaneous use, DELCID ® 7.5 refers to substances that are "moderately dangerous", in recommended doses it does not have a local irritating effect on the skin, allergizing and immunotoxic properties, when it gets into the eyes it causes mild irritation of the mucous membranes. The drug is toxic to bees, as well as fish and other aquatic organisms.

DELCID ® 7.5 is used for the treatment of cattle and sheep in order to destroy ectoparasites and protect animals from their attacks.

A contraindication to the use of the drug DELCID ® 7.5 is an individual hypersensitivity of the animal to the components of the drug. It is forbidden to use the drug to dairy sheep whose milk is used for food purposes.

Do not apply DELCID ® 7.5 on wet, damaged and contaminated animal skin.

Treatment with the drug DELCID ® 7.5 females during pregnancy and feeding of the offspring, if necessary, is carried out under the supervision of a veterinarian, based on an assessment of the ratio of the expected benefit to the possible risk of its use. Do not use the drug to calves and lambs during the suckling period.

The treatment of animals is carried out according to the indications on the street or in a well-ventilated room, by applying the drug with a dosing device to the dry and undamaged skin of the back from the head to the base of the tail along the spine once in the doses indicated in the table.

The protective effect after a single treatment with DELCID ® 7.5, depending on the number of ectoparasites and weather conditions, continues against ixodic mites for 4-5 weeks, against insects – 8-10 weeks. Repeated treatment of animals is carried out according to the indications, but not more than once every 28 days.

Before mass treatments, each batch of the drug is tested on 10-15 animals of different fatness. If the animals do not show signs of hypersensitivity to the components of the drug within two days after treatment, the entire livestock is treated. Lactating cows are treated immediately after milking, sheep of one herd are treated simultaneously after shearing.

Violations of the recommended interval between treatments should be avoided, as this may lead to a decrease in efficiency. If the next treatment is missed, it should be carried out as soon as possible in the same dose.

DELCID ® 7.5 should not be used simultaneously with other insecticidal drugs due to a possible mutual increase in toxicity. There is no information about incompatibility with drugs of other pharmacological groups and feed additives.

Side effects and complications when using the drug DELCID ® 7.5 in accordance with this instruction, as a rule, are not observed. With increased individual sensitivity and the manifestation of allergic reactions, the drug is washed off with water and, if necessary, antihistamines and symptomatic therapy are prescribed to the animal.

After treatment of animals with the drug DELCID ® 7.5, in accordance with this instruction, it is allowed to use slaughter products and cattle milk without restrictions, sheep slaughter products-not earlier than 3 days after the last use of the drug. The meat of sheep, forcibly killed before the expiration of the specified period, can be used as feed for fur-bearing animals.

The drug is stored in a closed manufacturer's packaging, in a place protected from direct sunlight, at a temperature of 2°C to 25°C.

The shelf life of the medicinal product, subject to the storage conditions in the manufacturer's closed packaging, is 3 years from the date of production, after the first opening of the package – 8 months. It is forbidden to use after the expiration date.