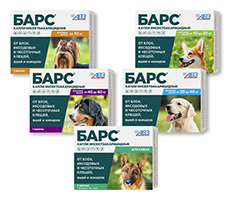 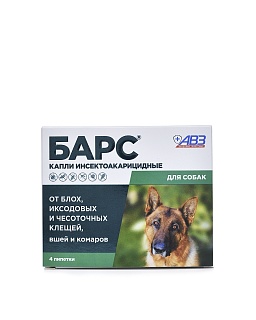 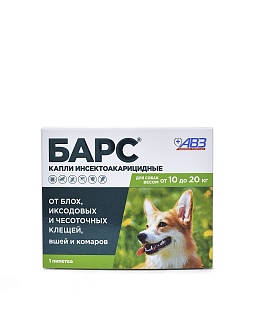 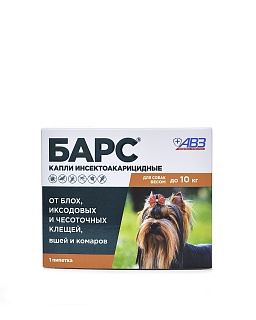 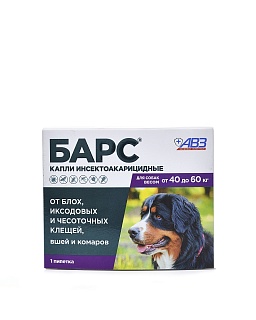 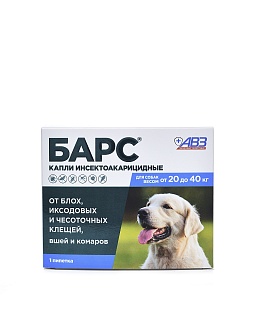 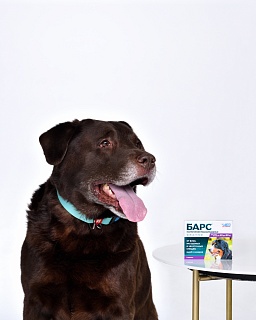 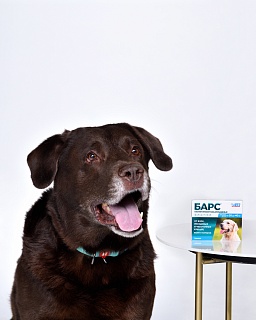 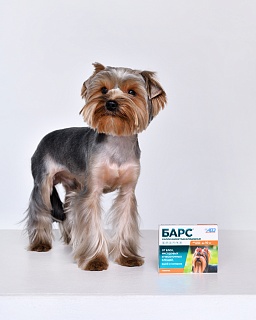 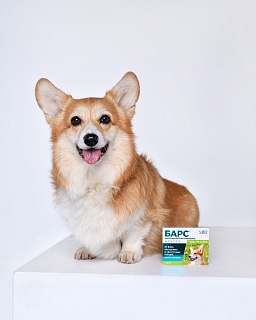 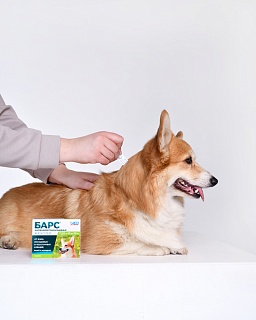 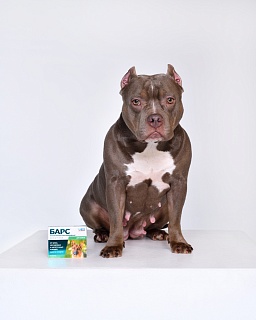 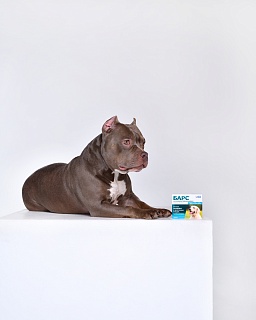 Medication against canine and feline arachnoentomosis

Polymeric droppers packed in cartons (by 1-4 pcs) with package insert.

The drug has a pronounced contact insecticidal and repellent effect, is active against the larval and sexually mature phases of the development of fleas, lice, ixodes, sarcoptoid and thrombidiform mites parasitizing dogs and cats, prevents the attack on animals of diptera blood-sucking insects (flies, mosquitoes, midges, mosquitoes).

Fipronil, which is part of the drug, belongs to the insecticides of the phenylpyrazole group. The mechanism of its action consists in influencing chloride channels, in particular GABA-dependent, as well as sensitivity-reducing (D) and non-sensitivity-reducing (N) glutamate-dependent channels (glutamate is specific to ligand-dependent chloride channels of invertebrates), thereby blocking pre- and postsynaptic transmission of chlorine ions through the membrane. As a result, this leads to uncontrolled activity of the central nervous system and the death of ectoparasites.

Cyflutrin, a synthetic pyrethroid, has a contact insecticidal and repellent effect, the mechanism of which is to block the transmission of nerve impulses, which causes a violation of coordination of movements, paralysis and death of insects at the first contact with the fur of the treated animal (before the bite).

Piperonyl butoxide is a synergist of pyrethroids, blocks the activity of enzymes monooxygenases and carboxyesterases involved in detoxification of insecticides, improves the penetration of pyrethroid through the cuticle, enhances its effect on the nervous system, accelerates the onset of paralysis and the death of ectoparasite.

Diflubenzuron, a compound of a group of chitin inhibitors, disrupts hormonal processes that ensure the synthesis of chitin in the body of arthropod larvae, which disrupts the molting process, causing the formation of non-viable forms, termination of oviposition, hatchability of larvae from eggs and replenishment of the population.

After the skin application of the drug, the active substances included in its composition are evenly distributed over the surface of the body without being absorbed into the systemic bloodstream, accumulate in the epidermis, hair follicles and sebaceous glands of the animal's body, have a long-term contact insecticidal and repellent effect.

A single treatment of the animal ensures the death of fleas within 24 hours, ixodes ticks, lice - within 48 hours. The protective action of the drug continues against ixodic ticks for up to 4 weeks, against fleas, lice and cheiletiella - up to 8 weeks; repellent action against diptera blood-sucking insects - up to 7 days.

BARS® insecticide drops are used for dogs and cats for the treatment and prevention of diseases caused by fleas (aphanipterosis), ixodic mites (ixodidosis), lice (linognathosis, trichodectosis), scabies (sarcoptosis, notohedrosis, otodectosis) and thrombidiform (demodecosis, cheiletiellosis) mites, in the complex therapy of allergic dermatitis caused by flea bites, as well as in order to protect against the attack of diptera blood-sucking insects.

The drug is effective against ectoparasites of the following types:

Contraindication to use is an increased individual sensitivity of the animal to the components of the drug. Dogs and cats with infectious diseases and weakened dogs and cats, as well as animals of other species, are not subject to treatment. Auricular use of the drug is not allowed in case of perforation of the tympanic membrane. The treatment of dogs and cats weighing less than 2 kg should be carried out with caution under the supervision of a veterinarian.

It is forbidden to use the drug BARS® insecticide drops to puppies and kittens younger than 8 weeks of age. The treatment of dogs and cats during pregnancy and feeding of offspring, if necessary, is carried out with caution under the supervision of a veterinarian.

Do not pet or let the animal near small children for 24 hours after treatment..

Before processing, tap lightly on the narrow tip of the pipette removed from the package (so that all the contents enter the main pipette tank), then break off or unscrew the tip. Pushing the wool apart, place the tip of the pipette directly over the skin in places inaccessible to animals for licking, pressing and gradually releasing the pipette, apply the solution to the skin at several points along the spine (from the ears to the area between the shoulder blades and along the back), avoiding getting the drug on the wool.

Taking into account the type and weight of the treated animal, a pipette of the necessary modification and volume is selected in accordance with the table:

To obtain an optimal protective effect, the treatment should be carried out no later than 24 hours before the intended dog walking in places where parasites may live.

In order to prevent repeated infestation by fleas, animal bedding is replaced or treated with insecticide in accordance with the instructions for its use.

To destroy ixodic ticks on the animal's body, a drug in the amount of 1 drop is applied to the tick and the place of its attachment to the skin. If the tick does not spontaneously disappear within 20-30 minutes, then it is carefully pulled out of the body with tweezers and destroyed.

In the treatment of otodectosis (ear scabies), the auricles and the auditory canal are pre-cleaned of earwax, exudate and scabs, then 4-6 drops of the drug are instilled into each ear. To evenly distribute the drug, the auricle is folded lengthwise and its base is lightly massaged. The remainder of the drug in the pipette is applied to the animal on the skin between the shoulder blades. In the advanced case of otodectosis complicated by otitis media, antibacterial and anti-inflammatory agents are prescribed and auricular use of BARS® insecticidal drops is repeated after 7-10 days. The drug must be injected into both ears, even in cases of otodectosis of only one ear. To prevent splashing of the drug (if the animal shakes its head), the animal's head should be fixed for several minutes.

In the treatment of demodecosis, sarcoptosis and notohedrosis (scabies), the drug is applied in a thin layer to the affected areas with the capture of borderline healthy skin. The treatment is carried out 2-4 times with an interval of 7-10 days before the clinical recovery of the animal, which is confirmed by two negative results of acarological studies.

To prevent the drug from being licked off, animals are put on a neck collar or muzzle, which is removed 20-30 minutes after applying the drug.

Do not wash and bathe animals with shampoo 48 hours before and 24 hours after treatment. Subsequent bathing of the animal without detergent does not affect the duration of the drug.

Side effects and complications when using BARS® insecticidal drops in accordance with this instruction, as a rule, are not observed. In rare cases, local rapidly passing changes of the skin (discoloration, allopecia, itching, erythema) are possible at the site of application of the drug, when licking the drug, increased salivation, short-term depression. With increased individual sensitivity of the animal to the components of the drug and the appearance of allergic reactions, the drug is washed off with water and detergent, if necessary, desensitizing therapy is performed on the animal.

The drug is stored in a closed manufacturer's packaging, in a place protected from light and moisture, separately from food and feed, at a temperature from 5 ° C to 30 ° C.

Insecticidal "Bars" drops should be stored in places inaccessible to children.

The shelf life of the drug, subject to storage conditions, is 2 years from the date of production.

Unused drug with expired shelf life is disposed of with household waste.

Polymeric droppers packed in cartons (by 1-4 pcs) with package insert. 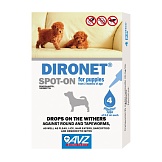 Migstim solution for external use for dogs and cats
100 ml