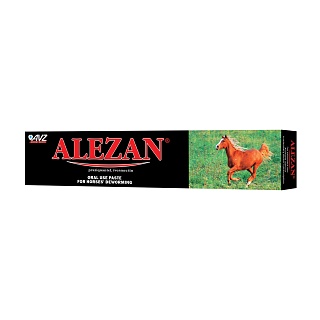 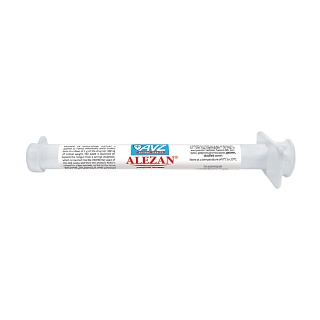 Alezan contains praziquantel - 10% and ivermectin - 2% (as active ingredients), as well as excipients.

Praziquantel (a component of the drug) is a pyrazine isoquinoline compound. The mechanism of action includes increase in cellular membrane permeability for calcium ions in roundworms and cestodes causing general muscular clonus and constant paralysis which lead to death of worms.

Increased individual sensitivity to the drug components. Do not use in milking mares with esculent milk, animals <100 kg, as well as in debilitated, contagious and recovering animals.

Adverse events and complications are not observed in case of administration as per package insert.

Single oral administration (1 g per 100 kg of body weight). Press out paste from a syringe dispenser on the base of tongue. Insert device in interdental space of oral cavity, then lift animal head within several seconds. Fix volume of paste per a horse by moving a fixator on plunger rod and appropriate dose fixing. Each syringe division stands for 1 g of paste.
Treatment and prevention: 2-4 times in a year, depending on type of disease and environmental invasion degree (under ovo- and larvoscopic control) according to recommendations listed in the table.

Before mass processings test each drug batch on small group (5-7 animals). In default of complications within 3 days, process all the livestock.

Animals are allowed to be slaughtered for meat not earlier than 20 days after deworming. Meat of compulsorily slaughtered animals received before stated period termination can be used to feed carnivorous animals.

Protect from light and moisture. Keep out of the reach of children and animals. Store separately from food and animal feeding at 0-20°С.