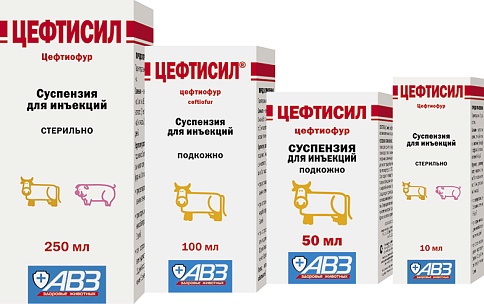 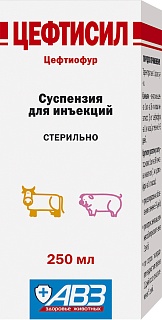 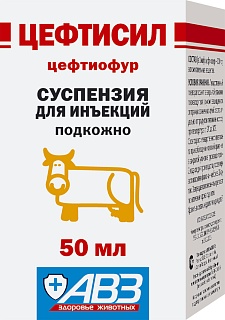 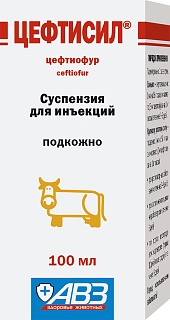 For treatment of cattle bacterial infections

The drug is manufactured in 50/100 ml glass and polymeric bottles of appropriate volume.

Use Ceftisyl to treat cattle with bacterial respiratory infections, necrobacillosis, acute puerperal endometritis and other primary and secondary infections, agents of which are susceptible to ceftiofur.

Increased individual sensitivity to beta-lactam antibiotics. Do not use in combination with tetracyclines and levomycetin (due to decrease in drug bactericidal activity), aminoglycosides, furosemide and ethacrynic acid (due to potential increase in nephrotoxic effect).

Single subcutaneous administration near the base of ear. Dose is 1 ml per 30 kg of body weight (6.6 mg of ceftiofur per 1 kg of body weight). Maximum volume of drug to be administered in the same site is 30 ml.

If volume of the drug to be injected exceeds above listed dose, administer it in several sites. Before every use carefully shake a bottle with the drug.

Adverse events and complications are not generally observed in case of administration as per package insert. Rarely an oedema may be observed in injection site which naturally disappears within several days. In case of increased individual sensitivity to cephalosporin antibiotics and allergic reactions, stop drug administration and use antihistaminic and symptomatic drugs. Overdose: potential dysorexia and inflammation of injection site.

Store in closed original package. Protect from direct sunlight and moisture. Store separately from food and animal feeding at 2-30°С.

Shelf life is 2 years from manufacturing date when stored in closed original package in accordance with regulations and 28 days after the first bottle opening.

The drug is manufactured in 50/100 ml glass and polymeric bottles of appropriate volume.