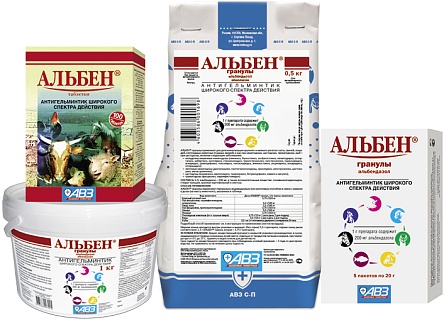 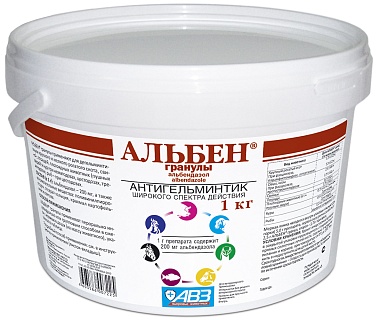 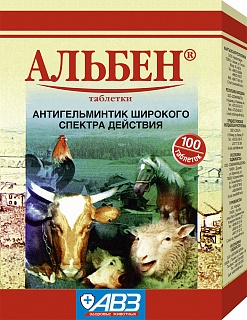 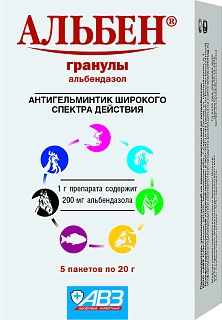 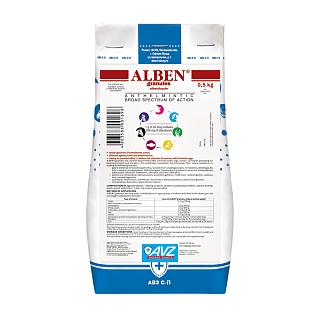 Albendazole (a component of the drug) has broad-spectrum antihelmintic effect. It is effective against mono- and polyinvasions, imagoes and larvas of roundworms, trematodes, as well as against cestode imagoes. Ovocidic action of this active ingredient allows to lower contamination of pastures by worm eggs.

Mechanism of albendazole action includes selective inhibition of beta-tubulin polymerization, damage of glucose transport and activity of microtubular system of worm intestinal canal cells, blocking of movement of secretory granules and other organelles in muscle cells causing paralysis and death of worms.

Do not use during lay period; in the first half (sheep, goats, pigs and carnivorous animals) and first trimester (cows and mares) of pregnancy; in contagious and debilitated animals.

Adverse events and complications are not observed in case of administration as per package insert.


Group administration: mix body weight-based dose of Alben granules with concentrated feed. Dosage per animal is listed below: horses and cattle - 0.5-1.0 kg; sheep, goats and pigs - 150-200 g; poultry - 50 g; carnivorous animals - 50-100 g.
Fill feeders (aimed at 10-100 animals) with the obtained medicated mixture providing animals with free access. Fish: group administration of Alben granules with feed (0.2 g per 1 kg of ichtyomass). Factory use: add 4 kg of Alben granules to 1 ton of feed mixture by trituration. Farm use: suspend 1 kg of Alben granules in 7-10 l of water and mix in mixer with 250 kg of feed stuff. Use the obtained mixture without previous starvation diet for 2 times, 24 hours apart. Daily quantity of feed is 5% of fish body weight.

Esculent fish is allowed to be caught and sold not earlier than 18 days after termination of the drug administration. Water temperature must be above 8°С.

Store in closed original package. Protect from light and moisture. Keep out of the reach of children. Store separately from food and animal feeding at 0-25°С.

Devastin powder for solution preparation for external use
2 kg
NEW 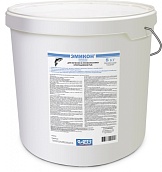 Emikon® POWDER FOR ORAL USE
1-kg and 8-kg 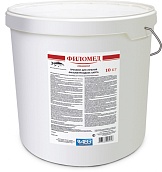